Mr Tran Minh Duc has been working in preventive healthcare (Centre for Disease Control) under Hoa Binh province’s Department of Health as an officer in charge of water, sanitation and hygiene (WASH) since 2012. He first started as the secretary of the province’s National Target Program period 2011-2015. Only until 2012 could Hoa Binh province secure funding for WASH communications and capacity development focusing on healthcare workers at the grassroot levels. Initially, most of them were not very well-informed of the available hygienic latrine models and neither were the locals. Since the locals would only take toilet as an auxiliary structure and construction cost might be quite high, they did not pay much attention to it or would rather wait until they could afford to have it built in conjunction with a house or a kitchen.

Such knowledge and working experiences in WASH have effectively supported Duc in his role in the WOBA project as a trainer of hygienic latrine classes designed for the local Women’s Union members and masons and as a technician for toilet inspection and verification. Through these classes, he has recommended various hygienic latrine types to trainees, using visual aids and detailed models. The classes also came with full instructions on cost estimation, technical options and material selection in order to promote the hygienic latrine uptake among the local communities.

Duc’s engagement in the WOBA project has brought about numerous changes for himself in terms of professional development, of which the most significant is the capacity to approach target beneficiaries. He has noticed significant difference in his observation, assessment and interview skills, particularly when working with poor, near poor and extremely disadvantaged households having people with disabilities. This change is important to him because it requires special skills to approach and communicate with these people who are usually not very open and approachable given their difficult conditions and disabilities. Since it has now become much easier for people to access information because of the widely accessible mass media like television, social networks, mobile phones, conventional communication approaches such as using leaflets, booklets, posters are no longer relevant. If he wants to talk people into building hygienic latrines and applying hygienic practices, he needs to channel their attention into specific topics by making home visits, using visual aids and specific models to demonstrate the benefits of having a hygienic latrine, presenting them with options of cost and materials that are suitable with their financial situations and even showing them where to get the materials for their latrines. He has to be direct, straightforward and methodological, and giving them detailed explanations and demonstrations.

The target of the change for Duc is the rural households, particularly the poor, near poor and the disadvantaged people since the WOBA project aims to reach out and benefit these particular groups with a strong focus on people with disabilities. His two years of experience working for WOBA have been two years of meaningful collaboration with various actors and partners, without which his capacity would not have seen such a significant improvement. However, it is the direct beneficiaries who play the most important role in bringing about the change. Through working with them, he has been able to get insights into their life, deepen his understanding of disabilities, and broaden his view of social inclusion. He also reports that he owes this change to the WOBA project officers and stakeholders whose facilitation and support have allowed him to connect to the beneficiaries.

This change has resulted from a wide range of activities Duc has been involved in through various programs and projects. The most recent activities are the training classes provided by East Meets West in coordination with the government agencies such as VIHEMA and other international institutions and organisations including DFAT, AusAid and World Bank. These training classes along with learning events have enabled him to identify barriers and drivers to people’s hygienic latrine uptake and locate sources of support for people with disabilities.

Noticeably, Duc has also observed the change among his colleagues at the CDC. In their early days, they would find it challenging and intimidating to make home visits in disadvantaged areas and work with people with disabilities. Nowadays, it is no longer a problem for them to conduct field trips to remote project locations and work with target groups because there have been considerable improvements in their observation, assessment and communication skills since they began working for WOBA. In their own words, they are always in the “ready-to-serve” mode.

According to Duc, the most impressive thing for him since joining the WOBA project is working with people with disabilities. Although he has been involved in a number of community development projects, he has never participated in a humanitarian program with close attention and profound devotion to people with disabilities like WOBA. In fact, there are regulations on accessible public facilities for people with disabilities, but they are not given due attention by responsible institutions and sectors. In WOBA, he is really surprised and touched seeing people with disabilities are cared for from the smallest things, which they are lacking and in serious need of. Unlike other daily activities like eating or drinking that they still manage to do themselves or get support from their family, using the bathroom is a whole different matter because it is a private business that has a lot to do with dignity. Thanks to WOBA, he has now had much better understanding of types of disabilities and accessibility, especially after the training class on accessibility in Binh Dinh in 2019. He had the opportunities to listen to real life stories of people with disabilities, role-play as a disabled person, which enabled him to understand what barriers they face in daily life and difficulties they encounter in accessing sanitation services. This is a totally new approach, helping to eradicate his past apprehension about working with people with disabilities.

One of Duc’s most meaningful experiences since joining WOBA was his home visits to a household in Quy Hau commune, Tan Lac district. That was a poor household with a disabled single mother and her daughter. Her house was built behind her brother’s, separated by a cow shed, which led to quite a bad hygienic condition. At that time, as he did not have sufficient knowledge of accessibility and experience working with people with disabilities, he was only trying to verbally persuade the brother to build a hygienic latrine for his sister. The brother, who was the decision maker in the extended family, was not welcoming his persuasion, arguing that his sister had been living well in such a condition so there was no need to build an accessible hygienic latrine for her. Now with the knowledge equipped by the WOBA project of the disability and accessibility, he believed he would use a different approach, “understanding by experiencing”. He would ask the brother to blindfold himself to see if he could go out and use the toilet without support and what difficulties he would expect to experience. Although that home visit was not successful, it taught him a great deal about approaching and working with people with disabilities. 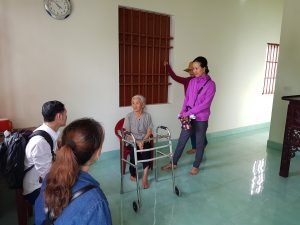 Leaving No One Behind: Lessons in practicing gender equity and social inclusion in WOBA Vietnam

The story of an old woman

How WOBA has contributed to taking Cambodia up the sanitation ladder

Advocating for women’s rights through innovative approaches and collaboration

Accessibility for people with disabilities: A significant change in a WOBA…